At the prestigious Wimbledon Tennis Championships, full of ceremony, media coverage and hype, people queue in rain or shine to see their favourite players – but disappointment has a tendency to strike, not only the spectators but the players too. 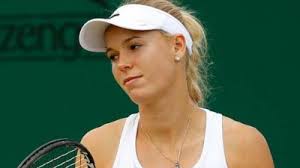 In a tournament that sees British fans rooting for an underdog, they still want to see the top players doing what they do best – playing amazing tennis. But what happens when you’re a top player who is not playing top tennis? And worst still, what if your top tennis playing fails you in the first round of the tournament?

We’ve seen it happen several times in the past and we’ll see it happen in the future. This time it was the turn of Danish player and former No. 1 seed, Caroline Wozniacki, to go crashing out of the first round of Wimbledon when she took on Russia’s, Svetlana Kuznetsova, seeded 13.

Bad weather prevailed and the pair had to play under the roof of Centre Court to a packed crowd. The rain had seen to it that games were cancelled or re-scheduled so all eyes were on this match. Wozniacki, who has spent recent months actively updating her personal life on social media, posting picture updates on Twitter, has also been trying her hand at modelling. Having had to spend several weeks out of the game because of an ankle injury, maybe the natural thing was for her to fill her days with glamour. It would have been impossible to train with that kind of injury, anyway.

But weeks before Wimbledon, she appeared to be ready, her Tweets were full of confidence, and so did she appear to be as she stepped on to Centre Court. But you can’t deny an injury and the result ended in a straight set defeat for Wozniacki in which her opponent beat her 7 – 5, 6 – 4.

Results on paper can never really tell the full story, though. The first set was a hard fought battle but it was the Russian who battled her way to a 7 – 5 win in the first set. Was being off with an injury starting to take it’s toll for Wozniacki? There was no doubt that Wozniacki was playing with grit and determination but at times you’d get the feeling that her muscle had lost some of its memory and seemed to fail her.

With confidence on her side, Svetlana Kuznetsova sprung up to the line and raced her way to a very convincing 5 – 1 lead. Anyone would think she had it in the bag at that point. Only a former number one seeded player could ever turn a score like that around. And then, a moment of brightness, on what was otherwise a rain filled day in south west London, Wozniacki fought back – convincingly so.

Caroline Wozniacki won the next twelve points in a row and the crowd shifted in their seats – they finally had a game on their hands. Maybe the tables would turn and they’d be in for a three setter. But, sadly, for Caroline, that was not going to happen. With her grunts increasingly loud and gruff, Svetlana Kuznetsova took control and won the second set in outstanding fashion and in accordance with her current form. It might be interesting to note that while Kuznetsova scored four aces to Wozniacki’s nil, it was Wozniacki who served the fasted on average.

The Danish player, Wozniacki, has had several advisors over the years but clashes with her father and trainer haven’t yet found her the ideal team. Maybe something to work on for the future.

For now Wozniacki’s dream of going to the Olympics in Rio in 2016 are also in the balance while the International Tennis Federation looks into her appeal to play for Denmark. Having not served out the required number of games to qualify her with a place, Wozniacki still waits while the Danish Tennis Federation support her claim to compete at the games. So far Wozniacki is still set to carry the flag for her country but for now she still remains – out of Wimbledon 2016.