It was with great anticipation, hope and an ambition to stay and see Euro 2016 to the end, that a young and highly regarded England team entered the Grande Stade de Nice in the match against Iceland. An early goal in the first two minutes, made England’s hopes and dreams look as if they might even come true.

It is fair to say that the football pundits were all worried that the Iceland team would not be playing in a way that suited the England game, concerned that Iceland would be on the defensive for the whole match. But a determined and fully charged Iceland didn’t sit back. They brought the game to England and seemed to cause a shock wave. Iceland’s enthusiasm to get results ended in an early penalty against them and England crowds were in full voice for their team as Wayne Rooney shot the ball to the back of the net with confidence. The game was on.

Then, disaster struck. In less than two minutes, Ragnar Sigurdsson scored an equalizer, quickly establishing a level playing field. The England fans were noticeably quiet as the game progressed and the Iceland supporters’ voices soared high and proud for the entirety of the game. Albeit that their chanting was reminiscent of 1980’s football chants. What did it matter – their players were well and truly in the game and England looked decidedly out of it.

To say that Iceland outclassed England might be a bit of a misnomer. The real fact was, England had no class to speak of. They made it easy; Rooney couldn’t seem to keep the ball, his long shots across field were misjudged and he just looked tired. Most of the England shots on goal were wide or so feebly applied that in the end England were looking like they were in the playground at school and not at Euro 2016.

The nail in the coffin came with Kolbeinn Sigthorsson’s second goal for Iceland. A lame error by goalkeeper, Joe Hart, saw England’s dream quickly diminish. Every attempt to equalise failed and the players as well as their fans were stunned.

But what about their manager? What did he do to try to turn this around? Well, very little. Substitutions came late in the day, the final of the three came in the form of an enthusiastic Marcus Rashford. His playing seemed to lift the mood but with only minutes until the end of the match, wasn’t that a bit too late? Earlier substitutions of Jack Wilshere and Jamie Vardy, did very little to help the assaults on goal. 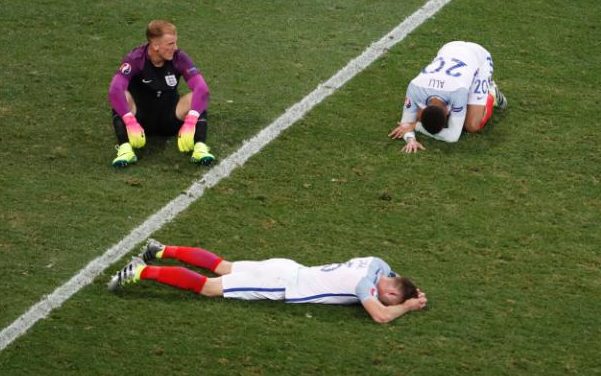 Deflated at the sound of the final whistle, members of the England team, lay on the field, bemused, exhausted and out of Euro 2016.

England’s manager, Roy Hodgson, left directly for a press conference and announced his departure as manager. His speech was already written out – was he expecting this result? During the match he’d looked worried, his hands over his face. Already the rumour mills are buzzing about who will become the next England manager.

It will take a strong manager to pull out the undoubted talent that exists in this England team. We’ve seen them perform in the Premiership and one day they, like Iceland, have to do the same for their country.

So what of the England fans who still have tickets for matches and hotels booked? Will they now switch their allegiance when Iceland take on France in the Quarter Final at the Stade de France? Will they now be chanting, Allez les Bleus!?